NEW ZEALAND OR NORWAY? Actually, it’s Fiordland, New Zealand. We may look similar, but we can never get rich through oil and gas exploration the way Norway did. PHOTO/DEREK ONLEY

WE COULD be like Norway, say oil industry proponents. Norway is rich because of oil and gas. If New Zealand wants a model from a similar-sized country, they say, it need look no further than Norway.

I’m reminded of a childhood fairy tale; remember the goose that laid the golden egg? Jack’s mother was aghast when he exchanged their cow for a few useless beans, but the beans were magic. After a number of near-misses, not without their health and safety risks, Jack got the goose, became wealthy beyond his wildest dreams and he and his mother got bigger digs and reportedly lived a happy, high-consumer lifestyle ever after.

Simon Bridges thinks oil and gas are going to be New Zealand’s golden goose, the way it was for Norway.

But he’s too late. Back in the 1970s the Norwegian Government made a calculated decision to tax the oil companies at 90 per cent. To their surprise, the companies paid the high taxes and kept coming. Norway got rich.

Norway still charge one of the highest tax rates, around 78 per cent, while New Zealand charges oil companies 42 per cent tax – one of the lowest tax takes in the world.

What Norway did in the 1970s is impossible to achieve today. Saudi Arabia and other Middle Eastern countries still have large reserves of “easy” oil. Their production is not at full capacity, so they still have the ability to influence world oil prices. Ramping up Middle East production volumes can bring prices down and make unconventional and marginal oil production uneconomic. This is far from the full explanation of the current oil price crash, but it’s been cited as a part of the puzzle.

Even before the 50 per cent drop in Brent Crude (the North Sea oil pricing benchmark), no oil company today could afford the royalties/taxes that Norway demanded back then. For deep sea drilling in New Zealand, described by the industry as a “frontier” region, margins are tight.

Back in Norway, it’s not all golden eggs. At current prices, more than half the offshore fields being developed along the Norwegian continental shelf are uneconomic [1].

In the past six months Norway’s kroner has dropped 20 per cent against the dollar. Norway’s partially state-owned oil companies Statoil and its service companies have cut thousands of jobs, and Norwegian unions are calling for government measures to protect the industry [2].

The fairy tale is ending, but Hilde Opoku of Norway’s Green Party says Norwegians are still blind to the coming change. “When we wake up from this oil bubble,” he said, “we will realise we will never have a fairy tale like this again.”

No one will. Climate change now dictates our future, a future where, if we are to keep global warming to the agreed 2C limit, most of our known reserves of oil and gas cannot be burned. Why on earth are we looking for more? Oil and gas will never be New Zealand’s golden goose. It’s time to stop believing in fairy tales.

-Rosemary Penwarden is a freelance writer and member of several environmental and climate justice groups. In between projects, she divides her time between her 3-year-old grandson and elderly mother.

Oil Free Otago member Rosemary Penwarden: “We have taken our eyes off the ball by allowing bad industry science to put the smallest, rarest and most endangered dolphins in the world into the firing line.”

“Rosemary Penwarden, of Waitati, links seismic testing for oil and gas with serious harm to whales and dolphins.

Please don’t read this if you want a good news story.

It’s a story of loss, of taking our eyes off the ball and letting bad stuff happen.

Maui’s dolphins used to play off the North Island’s west coast beaches the way Hector’s dolphins do off Warrington and other Dunedin beaches.

Now they face not only gill nets, but also this Government’s decision to open most of their west coast home range to oil industry seismic testing.

What is seismic testing?

I posed that question when visiting the NZ Oil and Gas ”What Lives Down Under” roadshow before it travelled to South Taranaki schools last year.

A cartoon of a bat explained the industry’s sonar technology similarity with these furry wee creatures, giving the impression of a benign series of electronic blips on a radar screen.

In reality, detonators on seismic ships such as the Aquila Explorer, now surveying in the North Island for Norwegian oil giant Statoil and soon destined for the Great South Basin off our coast, send sonic explosions every 10 to 15 seconds down hundreds of metres to penetrate the sea floor and bounce back to surface detectors, revealing possible points where oil or gas may be found.

Oil prospecting air guns reach about 260 decibels (dB) on a logarithmic scale on which it is known that anything above 170 dB disturbs marine organisms.

Don’t be fooled by the oil industry’s reassurance that ”there is no evidence to suggest seismic testing injures marine mammals.”

That is not science.

That is twisted logic on a par with equating furry bats with seismic ocean blasting.

The industry will argue observers on their seismic vessels halt ”blasting” when a whale or dolphin is seen, but University of Otago associate professor of zoology Dr Liz Slooten said having observers on oil survey vessels was ”virtually useless”, as observers see about only 10% of whales and dolphins in the area.

In 2013, scientists concluded the mass stranding of about 100 whales northwest of Madagascar was primarily triggered by seismic blasting by a survey vessel contracted by Exxon Mobil.

In July last year, a 100-tonne blue whale washed up on Tapuae Beach in Taranaki.

Did seismic blasting kill it?

The level of decomposition suggests it died about the same time in the same area that blasting was taking place.

This week, three beached whales were found on Whatipu Beach near Auckland. Seismic blasting is occurring offshore in this area right now.

Would it be unreasonable to think that seismic blasting would injure or kill a small dolphin, dependent as it is on sensory specialisations such as echolocation for navigation, communication and feeding?

This February and March, despite the collapse in oil and gas prices, despite the cost to New Zealand Oil and Gas, Woodside Energy, Anadarko, Origin Energy and Discover Exploration Ltd, despite signs that future exploratory drilling in our remote, marginal conditions looks far from economically feasible, and despite the insanity of exploring for more oil and gas when burning already discovered reserves would take us way past 2degC of global warming and so must not occur, 3-D seismic blasting is scheduled to go ahead in the Canterbury and Great South Basins off Dunedin.

While the North Island is the Maui’s dolphin home range, our southern oceans are home to 38 of the world’s 80 whale and dolphin species.

That’s almost half of the entire world’s species in our place, in our care. On our watch.

We make sure our children wear hats in the sun. We wear seatbelts, keep left, get a warrant of fitness and do all kinds of other sensible things to avoid bad stuff happening.

We have taken our eyes off the ball by allowing bad industry science to put the smallest, rarest and most endangered dolphins in the world into the firing line.

The world is watching; the Scientific Committee of the International Whaling Commission issued urgent recommendations in May last year to protect Maui’s dolphins, and was ignored by government.

How many years did we have ”no evidence that smoking causes lung cancer?”

How many millions of people died before the tobacco industry was held to account?

We would be naive to imagine there are still 55 Maui’s dolphins left.

The question ”Will seismic blasting mean the end of these dolphins?” has not been answered.

Until it is we should adopt the precautionary principle and avoid this harmful practice.

There may still be time to give this story a happy ending.”

Protesting Shell on the Peninsula

Protesting Shell on the Peninsula 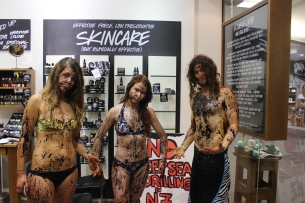 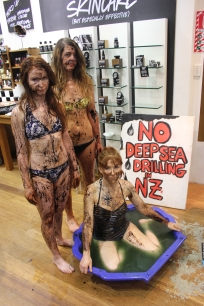 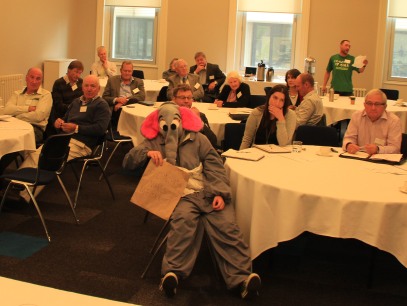 Climate elephant in the room at Shell ‘public engagement’ meeting 2013 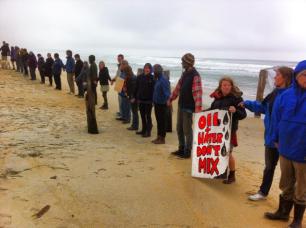 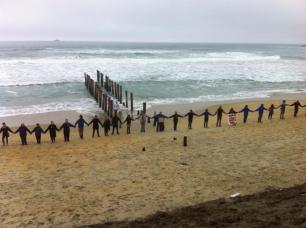 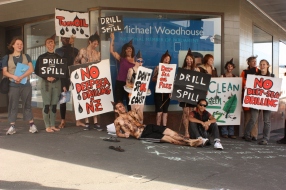 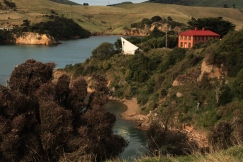 OIl Free Otago assisted the St. Martin Island Community in the painting of Quarantine Island’s Chapel roof with an albatross 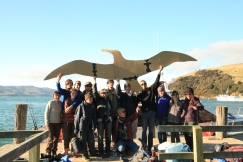 OIl Free Otago assisted the St. Martin Island Community in the painting of Quarantine Island’s Chapel roof with an albatross

Painting the Toroa on Quarantine Island 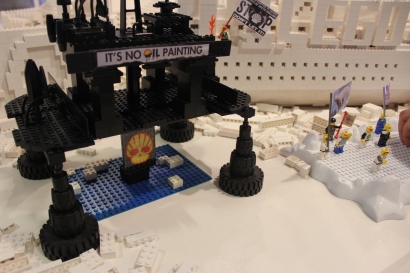 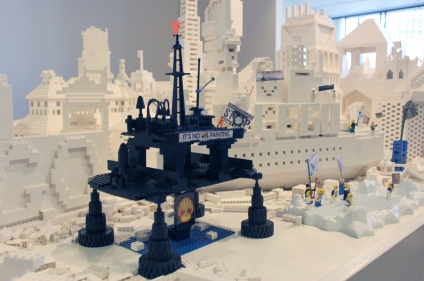 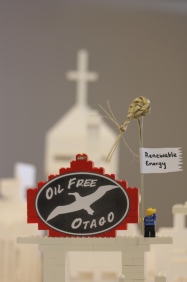 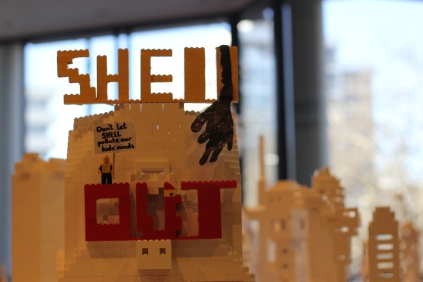 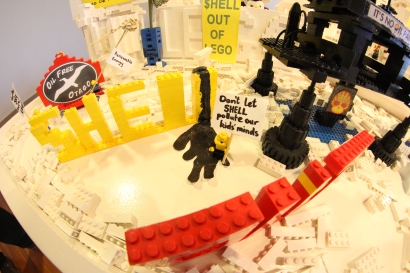 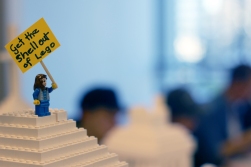 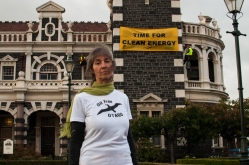 The sailing vessel Tiama in front of the drill support vessel the Hart Tide. The Oil Free Otago flotilla is a coalition of Otago residents who oppose deep sea drilling off our coast. Photo by Nick Tapp – nicktappvideo.com

The sailing vessels Erewhon and Tiama sail in front of the drill ship the Noble Bob Douglas. The Oil Free Otago flotilla is a coalition of Otago residents who oppose deep sea drilling off our coast. Photo by Nick Tapp – nicktappvideo.com 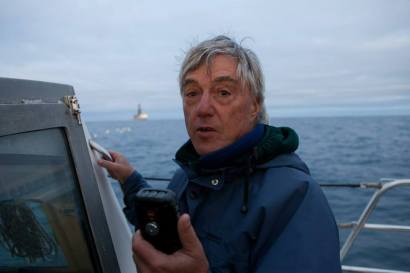 Professor Bob Lloyd, director of Energy Studies at the University of Otago, sends a message to the drill ship the Noble Bob Douglas explaining his opposition to deep sea drilling. The Oil Free Otago flotilla is a coalition of Otago residents who oppose deep sea drilling off our coast. Photo by Nick Tapp – nicktappvideo.com

Reverend Doctor Peter Matheson, former lecturer in theology, sends a message to the drill ship the Noble Bob Douglas explaining his opposition to deep sea drilling. The Oil Free Otago flotilla is a coalition of Otago residents who oppose deep sea drilling off our coast. Photo by Nick Tapp – nicktappvideo.com 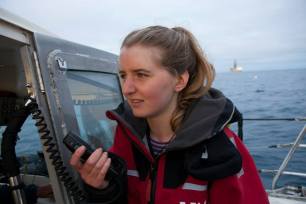 Torea Scott-Fyffe, local youth, sends a message to the drill ship the Noble Bob Douglas explaining her opposition to deep sea drilling. The Oil Free Otago flotilla is a coalition of Otago residents who oppose deep sea drilling off our coast. Photo by Nick Tapp – nicktappvideo.com 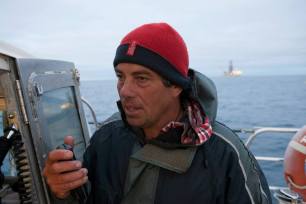 Brendan Flack, Tangata Tiaki, sends a message to the drill ship the Noble Bob Douglas explaining his opposition to deep sea drilling. The Oil Free Otago flotilla is a coalition of Otago residents who oppose deep sea drilling off our coast. Photo by Nick Tapp – nicktappvideo.com

The Oil Free Otago flotilla is a coalition of Otago residents who oppose deep sea drilling off our coast. Photo by Nick Tapp – nicktappvideo.com 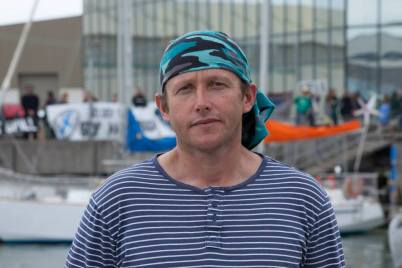 The Oil Free Otago flotilla is a coalition of Otago residents who oppose deep sea drilling off our coast. 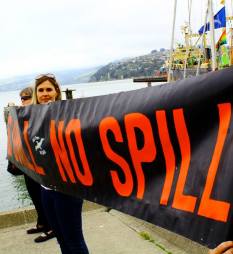 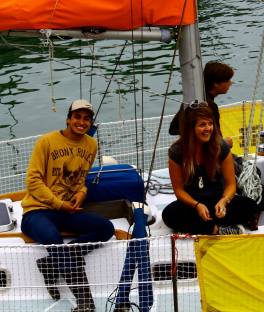 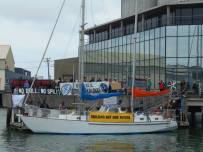 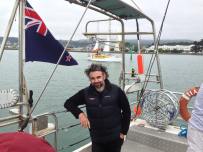 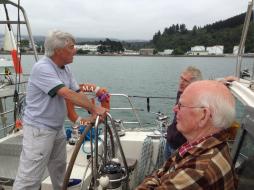 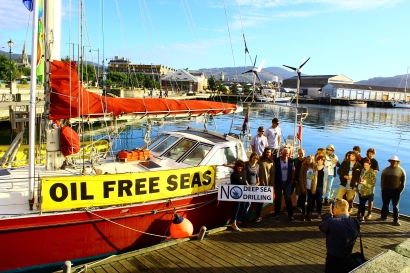 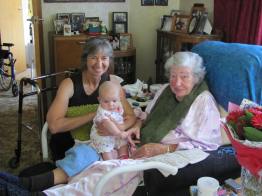